If you’ve been here before you’ll know things have changed… this web site for starters. There were some issues with things in the background. All round top bloke Alan who does wonderful web wonders for me moved servers and when I did I realised I hated the look of my website. I then spent a couple of days tweaking things, bashing stuff with a hammer and Googling phrases like, “Adjustment layer Gimp”. My search history is forever tainted.

There’s a lot happening, you see. I don’t have a lot of time. But stuff is happening. Here is an example:

Yes, that’s a You Tube playlist of 10 poetry videos. It’s all part of project I’m involved in with the Poets, Prattlers and Pandemonialists collective. We’ve had Arts Council England funding to produce The Black Country Broadsheet. We will be handing out the broadsheet to people over the coming weeks and chances are you’ll find some knocking around your Black Country town. The broadsheet links to the videos above (you see, it’s all making sense) and we’ve even got each poet to have some pictures taken by the fabulous Nicole Lovell.

On top of that are a series of live shows featuring different poets and some open mic spots. 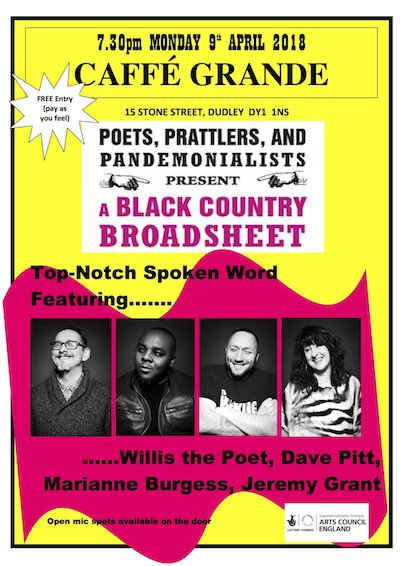 That’s going to be a corker of a night and we have more planned.

On top of that our PPP show is still spreading its wings. We’re in Stourbridge on Thursday 12th April 2018 at The Duke William. Tickets are £5. We’ve also got gigs in Swindon, Birmingham and somewhere else I can’t remember lined up. It’ll probably cause me to make another blog post closer to the time so it’s probably best if I don’t look them up.

I’m off now… until next time…